The narrative in this bible text is quite reminiscent of the apostles, especially, after Jesus’ departure. David was a mighty man of valor, but the reading today shows us that a tree no matter how mighty cannot make a forest.

It was a listing of names upon names. Every single deed, act of devotion and commitment were carefully noted down. Nothing done for David and his cause went unnoticed. It is therefore not a surprise that Bible also encouraged us in 1Corinthians 15:58 to be steadfast and immovable abounding in the  work of the lord, forasmuch as you know that your labour is not in vain in the lord.

These men from diverse background, out of the thousands of David’s army were recognised for their unalloyed loyalty, love, commitment, sacrifice, strength and obedience. Did you notice  that  Uriah was also listed while Joab was not. Even in distress we must learn to remain true and faithful, doing the work of the master the way he wants it and not the way it is convenient for us.

Read also: The spirit of the lord spoke by me.

The church needs such an army. The lord Jesus needs men and women who are completely committed to his cause. Men who will not only be attracted to him but also attracted to his cause. The first remarkable thing about these men of David was that they were in love with the person of David. They got attracted to him even when he was a fugitive. But they were aware of the undeniable anointing upon his head. Though Saul persecutes them they stayed put. They rebelled against Saul’s leadership and accepted the new king and His kingdom even when it was yet a mere dream. 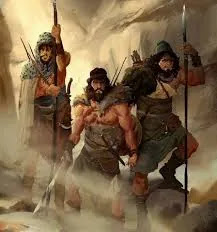 Today, as believers, we have rejected the reigning king of this world, the ruler of the power of darkness, the devil. We have embraced Christ whose kingdom is yet obscure. But who we are sure is reigning already in our hearts and lives. We must remain resolute in our commitment, remember Revelations 2:5 and return to your first love. The three risked their lives to get David water from the well in Bethlehem. Have you served Christ and his cause up to this level?  He who stands till the end will receive the crown of life. His name will be written in the book of life, Jesus will give him a stone in which is written a new name (Revelations  2:17).

JESUS’ kingdom needs building. Be a committed army to his cause. Quit being a complacent Christian with little or no commitment at all. If you declare me before men, I will also declare you before my father. Keep these words in mind God bless you.

Back To Top wpDiscuz
0
0
Would love your thoughts, please comment.x
()
x
| Reply